Workshops, Sinulog and Reflection on the Past Year

The past couple of months have been action packed with lots of traveling, learning and thinking of the year ahead. Inevitably, when one starts to think about the challenges and hopes for the future we find ourselves reflecting on the past. It was this time last year that my wife and I finished a successful Kickstarter campaign for the Katutubong Filipino Project (Indigenous Filipino people project). It feels like a lot longer than a year ago that we ventured into this project, but we are thankful for it and for all of the people we have met because of it.

We are still working on the project with two major areas still to visit with our Kickstarter funds. After these two areas, I’m excited to continue and make this a long term project of mine. One year really just let us scratch the surface of what this project entails and I would like to look for grants and other means this year to continue photographing more groups and communities. Throughout the year, our attention will also graduate to doing some outreach with the photos we have gathered. There are avenues for this opening up so please stayed tuned for what’s to come with the Katutubong Filipino Project. Again, I am extremely grateful for all the people who have helped us along the way. I will not forget your generosity and time and something really good will come out of all the help people have given.

While most of 2012 was dedicated to working on the Katutubong Filipino Project I have also kept busy this past year with other equally important tasks. Besides the everyday undertakings of photo editing, stock image preparation, emails, contacting editors, and arranging travel, I have been refreshing my feature writing skills and learning more and more about storytelling and how to best create a strong visual narrative. Being able to tell a story with images and present it in a way that has impact and meaning takes a lot of work and heart. Storytelling has always been at the core of what I want to accomplish as a photographer and lately I have been looking more into the technical and objective side of it. There is always room to learn and grow and I have been fueling my hunger for this over the past year. 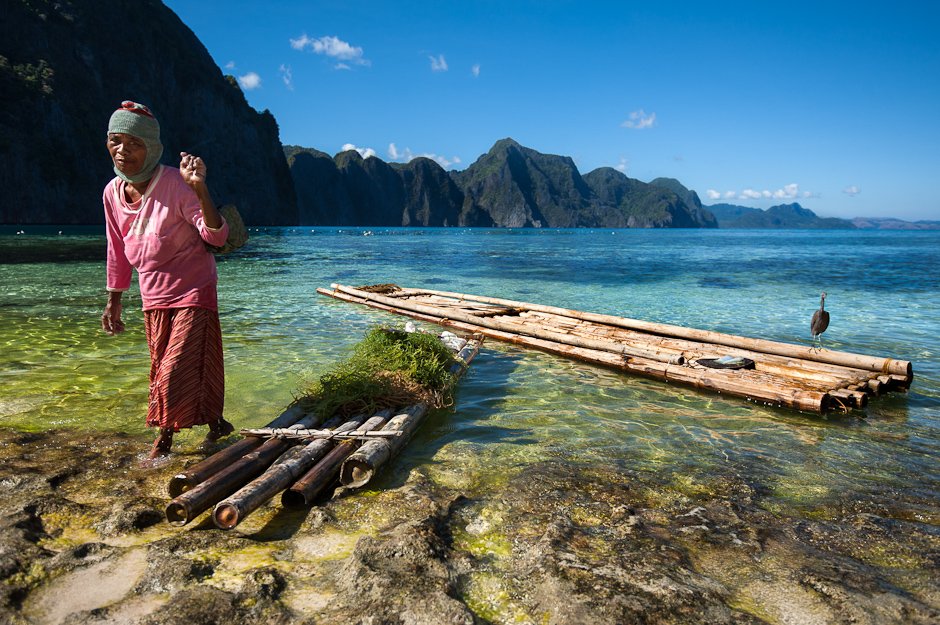 A Tagbanwa woman on Coron Island arriving home with her seaweed harvest. This was taken in Coron, Palawan while giving a one-on-one workshop last December.

More recently, my time during the past couple of months was devoted to conducting two different one-on-one workshops, which I feel were both successful in their own ways. These workshops brought me to Manila, Palawan, northern Luzon, and then eventually back home to Cebu and onward to Mindanao. I find that teaching photography techniques and seeing my students overcome challenges can be very rewarding. The one-on-one nature of the workshop I give really allows itself to focus on what the student whats to learn or improve on.

During one of the workshops, Sidney Snoeck, a Manila based photographer guided us around the city. Sidney is a wonderful guide and knows the in’s and out’s of Manila. He is passionate about finding new and interesting stories to photograph and you should visit his blog or website if you have time. 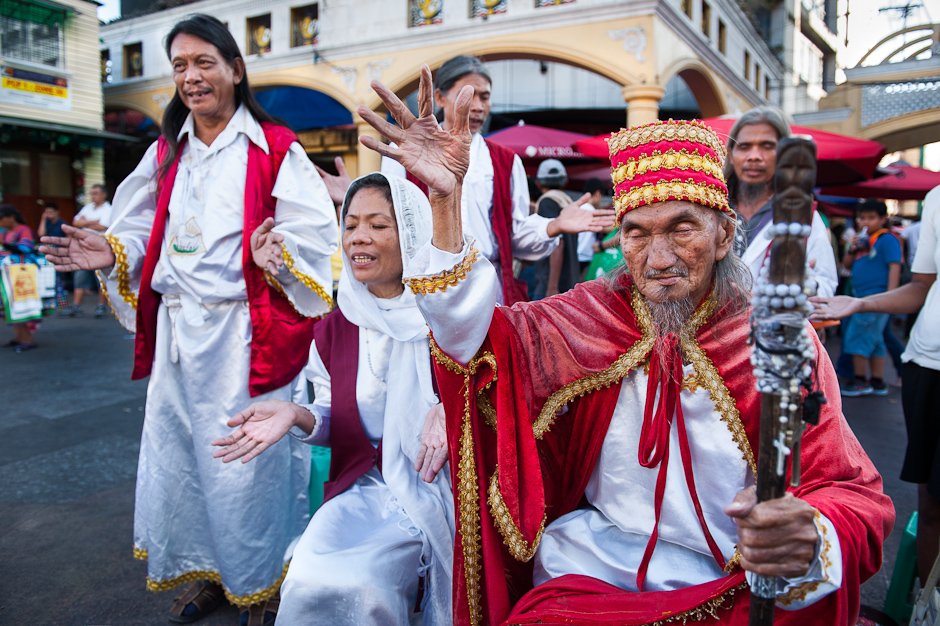 This is Kristong Hari (Christ King) who spends his Fridays in front of the Quiapo Church in Manila ready to bless and heal people. He believes that Jesus Christ took possession of his body and in 1981 he started his ministry of healing people. In this photo, Kristong Hari is singing with his followers in Quiapo and he even made his voice sound like child who he says is the voice of baby Jesus. A very interesting man. 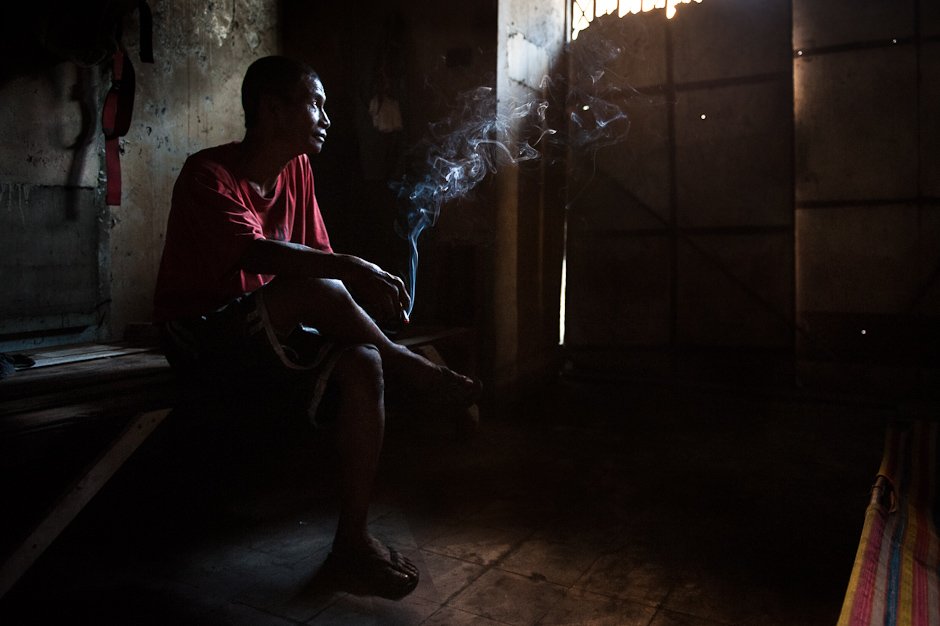 We came across this man while walking the streets of Manila. It provided a great opportunity to look at light and create an interesting portrait. By being able to have flexibility in a workshop schedule (because it is only one-on-one) we are able to explore a bit deeper and get ourselves into situations that would be very difficult with larger groups.

One of the places we visited was the charcoal community of Ulingan, one of the poorest communities in Manila. This area certainly has one of the harshest living conditions I have seen in my life mainly because of the toxic smoke constantly inhaled from producing charcoal. Many of the families in this community buy wood that is collected by scavengers and others to make charcoal as their livelihood. In addition, their community sits on top of an old garbage dump and the conditions they live in are horrendous. Many of the families also have to resort to eating food found within the dump site. Young children help their families make charcoal and they are exposed to the fumes all day long. Sidney volunteers for a great organization that is helping the people and children of Ulingan called Project Pearls. They are making huge strides to help educate the children there and providing them with proper nutrition. If anyone is looking for an organization to get involved with this would be a great one to get in touch with. 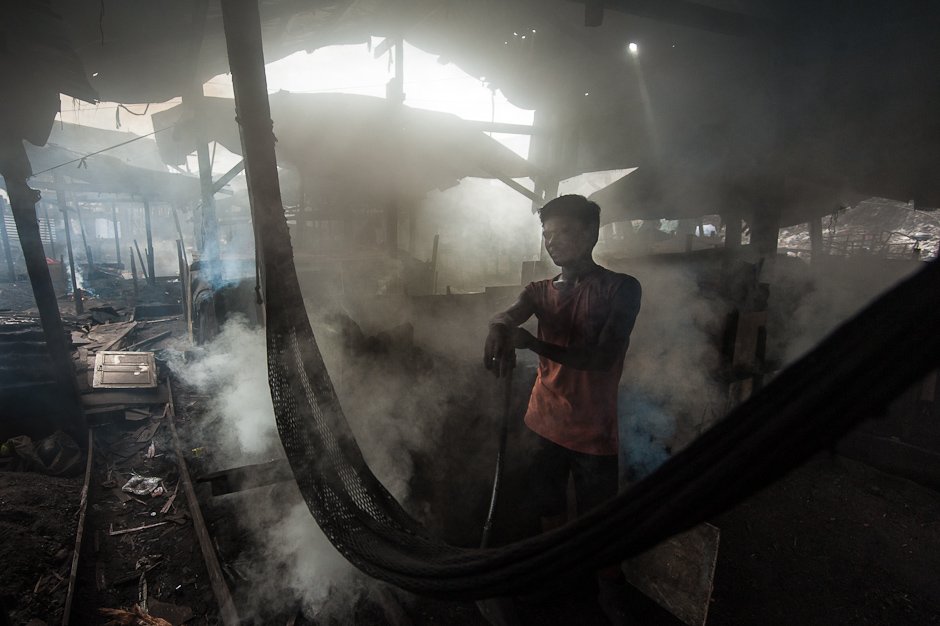 A man tending to charcoal at Ulingan, Manila. Soil has to be placed on top of the burning wood to keep it at a certain temperature. It was hard to breathe while photographing here and it’s really hard to imagine that people live in this type of environment every day. 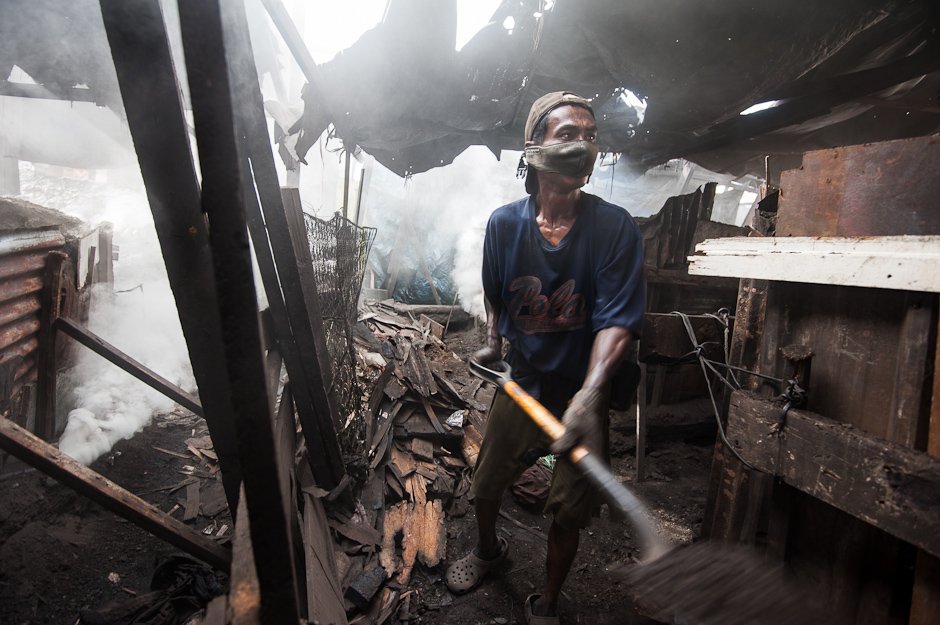 January arrived and with the new year came festival time in Cebu City. Sinulog is one of the bigger festivals in the Philippines and it had been a couple of years since I photographed the event. This year I had time to join some of the religious processions and activities that happen during the nine days of Sinulog. I find the religious aspect of the festival much more meaningful and interesting than the grande parade with street dancing that happens on the last day. Devotees from all over Cebu and other islands make their way to Cebu City during the nine days to pay homage to the Santo Nino. Visually it is more challenging to photograph the religious aspect of the festival, but to see the devotion and dedication so many people have is truly a fascinating sight. 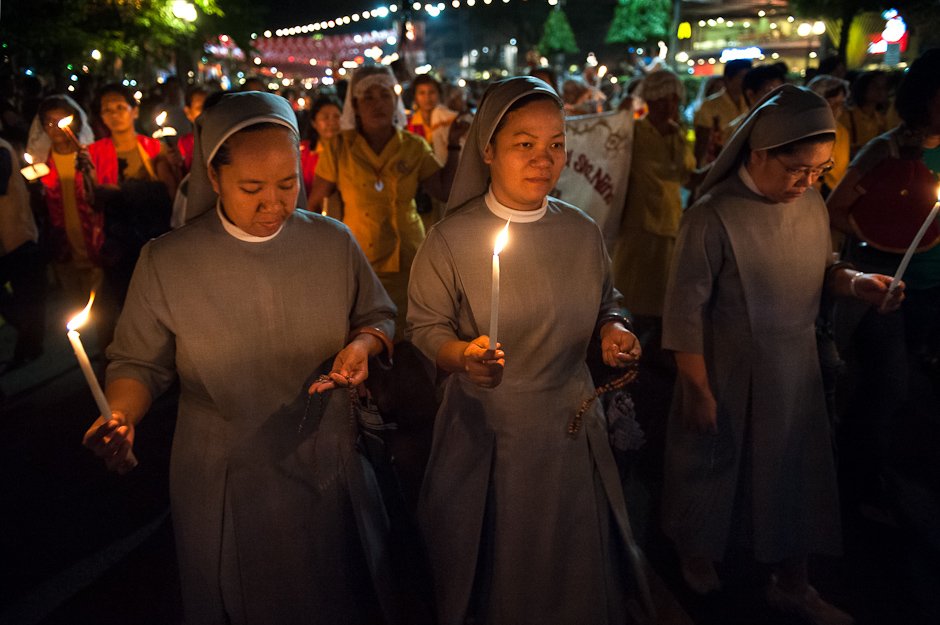 Nuns during the “Walk with Jesus.” Thousands of devotees gather for a procession through the streets of Cebu on the first day of Sinulog. 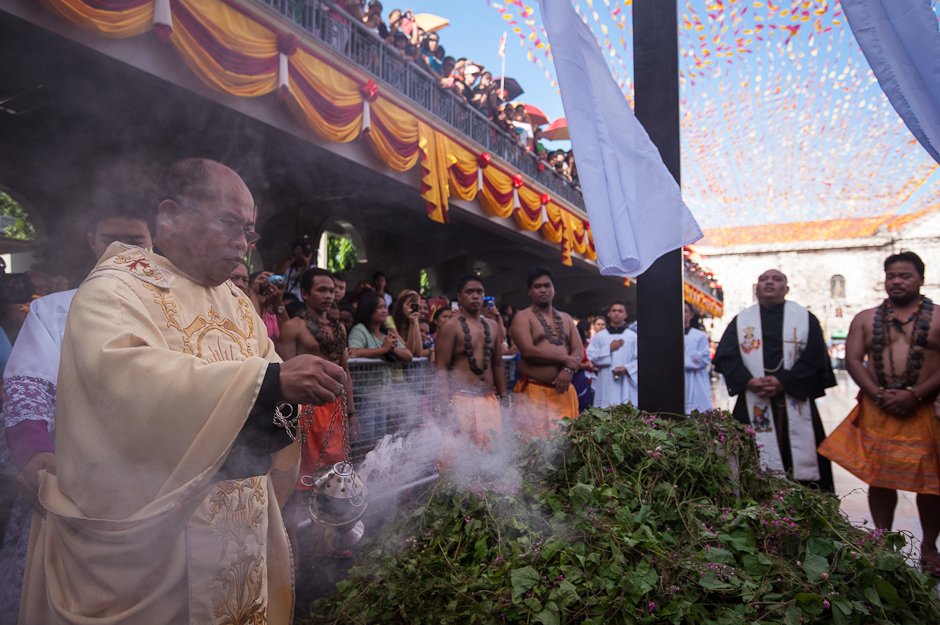 A ritual to commemorate the Christianizing of the Cebuano’s by the Spanish. This was done outside of the Santo Nino Basilica after the fluvial procession of the religious icons. Alter boys lead the procession at a Sinulog Mass. 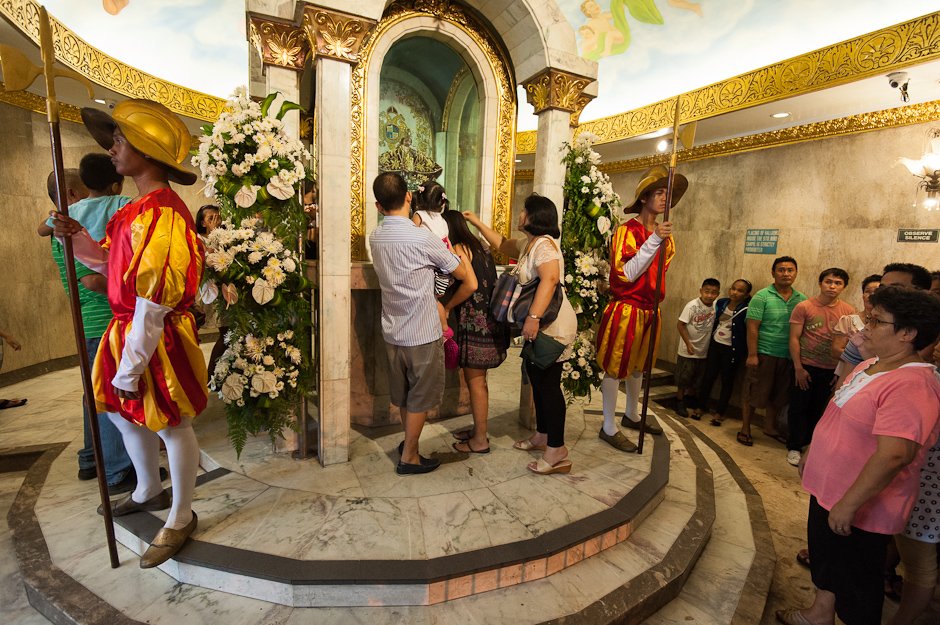 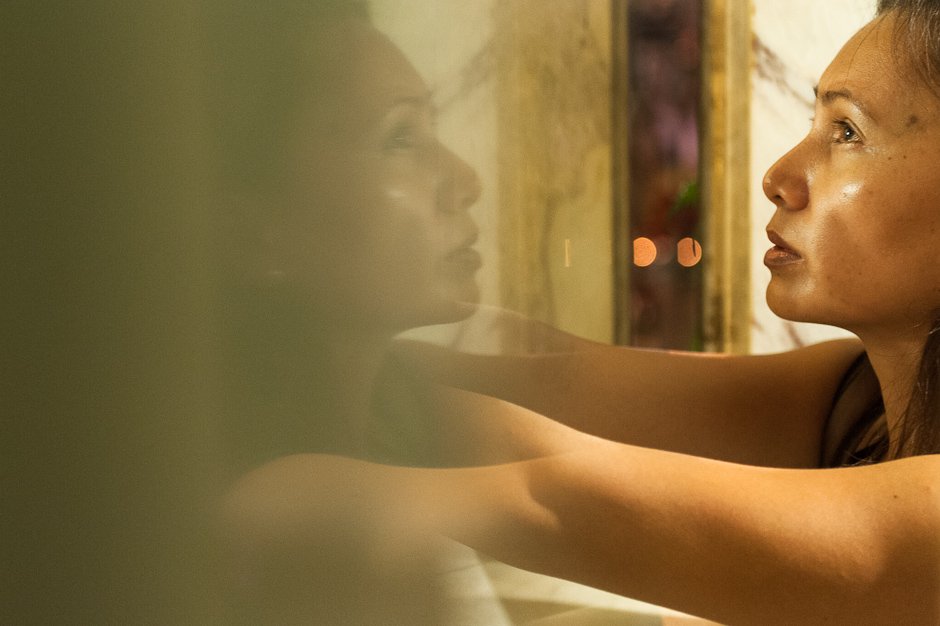 A woman praying at the side of the glassed housed original Santo Niño at the Basilica Minore del Santo Niño. Because of the long line people are limited to a very short time to offer their prayers or petitions, usually about 5-10 seconds. I noticed, however, that some people make their way to the side of the housed Santo Nino where they are able to spend a little longer without being bothered by security. 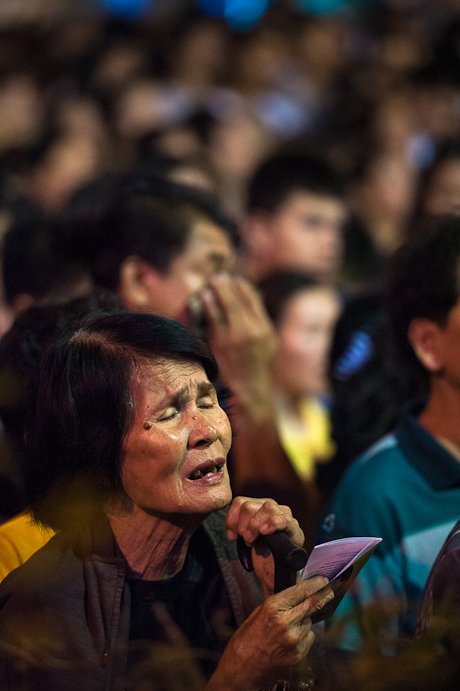 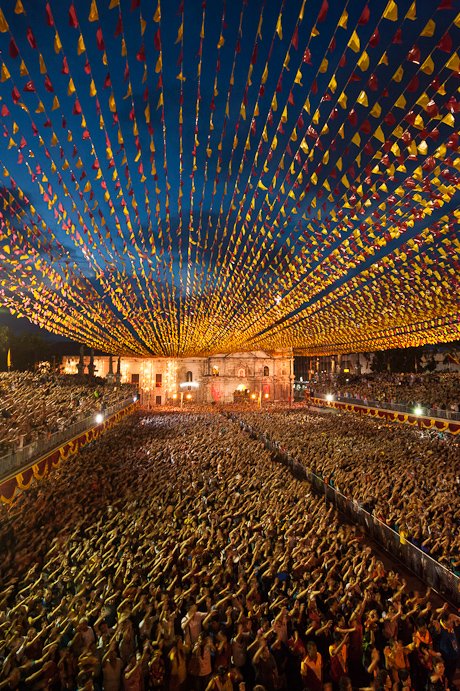 Devotees attend mass by the thousands. Starting at 5:30am until 8:00pm mass is held every hour and a half for nine days straight. During mass people wave their hands to the Santo Nino while singing a song called the ‘Bato Balani Sa Gugma’. 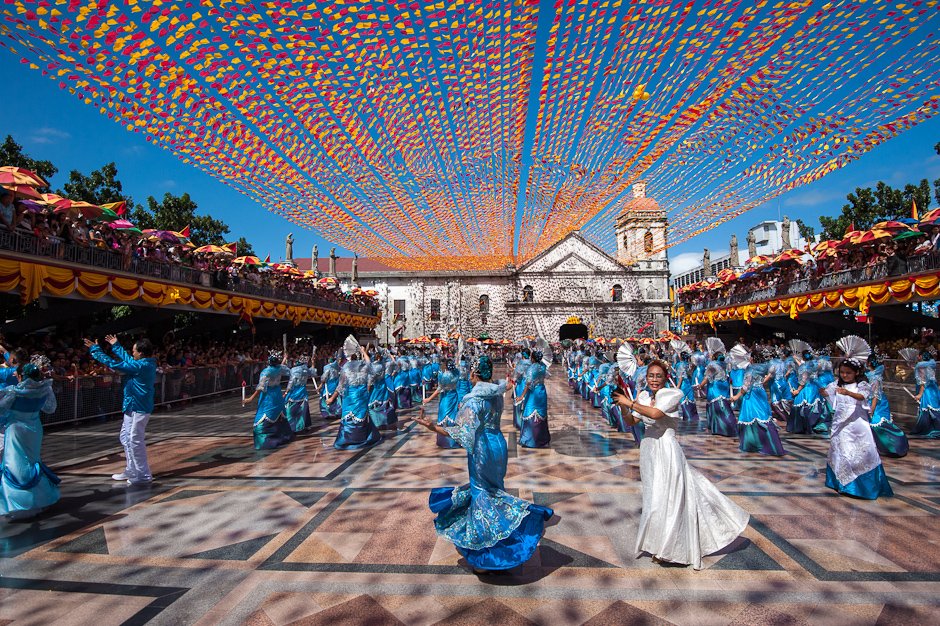 Dancers perform at the Basilica after mass in preparation for the grande celebration and dancing during the street parade.

Of course, the grande parade with street dancing is a key part of the celebration as well. I have found though that this day has become very commercialized and I feel more people come out to see the actresses and actors than the street dancing. It is a fun time, but the amount of people taking photos and other photographers competing for space is a little annoying. 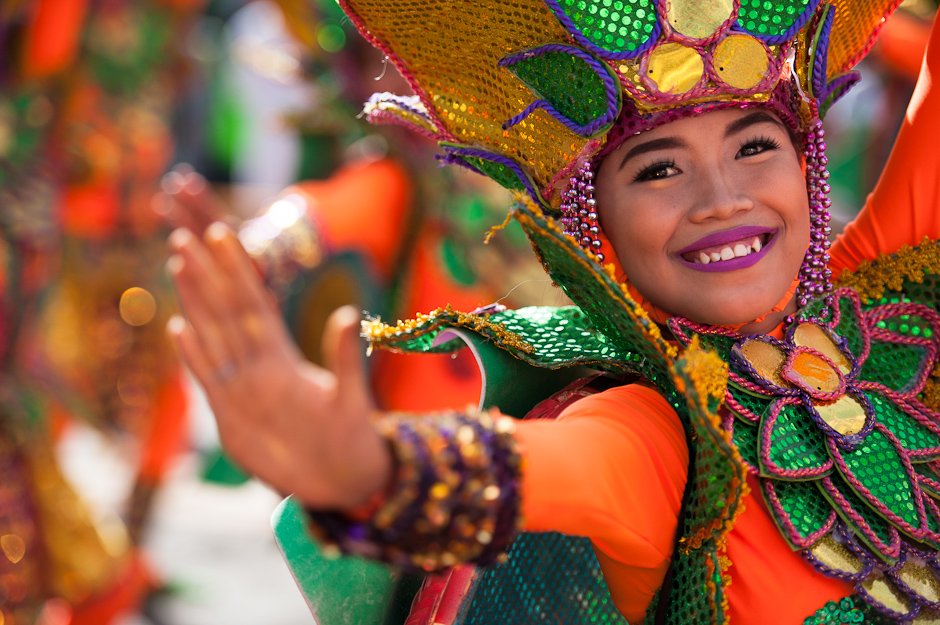 A colorful dancer smiles while performing during the Sinulog grande parade. 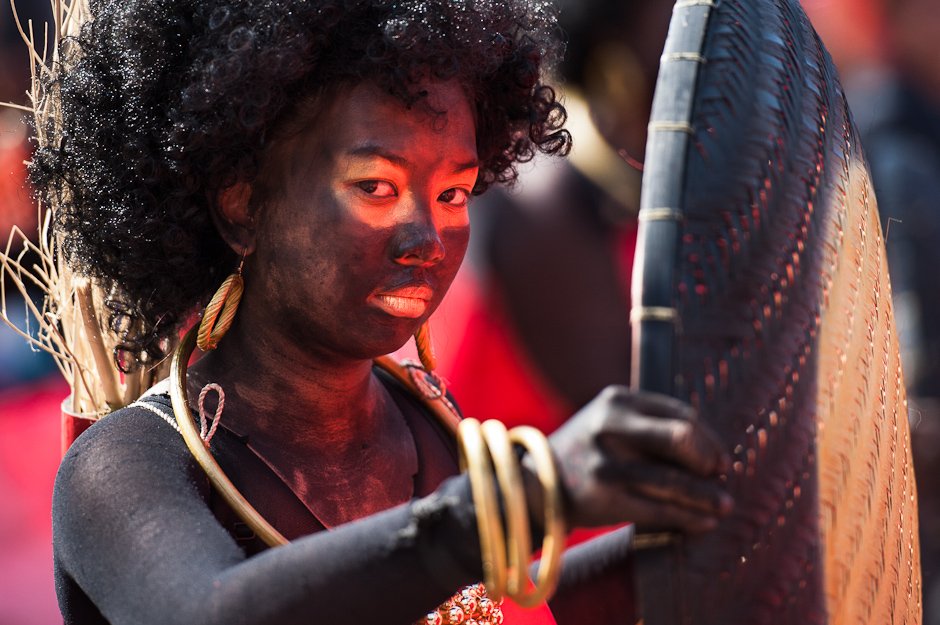 After Sinulog, I made my way down to Surigao, Mindanao as part of another workshop. I love getting into rural settings and seeing people do their everyday activities. These are the places where interesting photographic opportunities often present themselves and genuine people are interested in what you are doing. Going into rural settings allows me to slow down and look a little deeper. Mindanao itself is a special place and being able to explore and look around there is always rewarding. 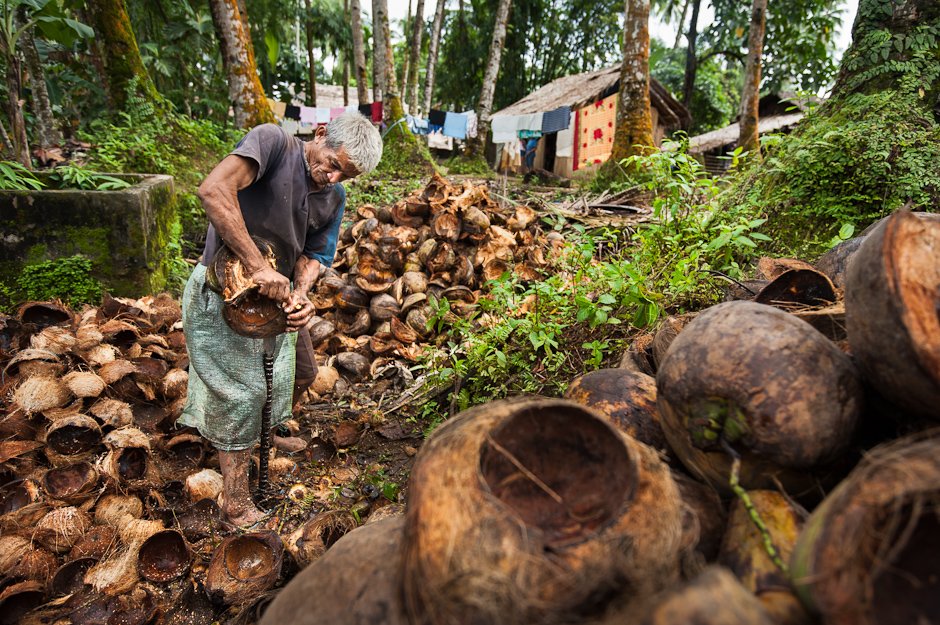 We came across this coconut husker in Surigao del Sur while looking for subjects to practice with off-camera flash. The husker didn’t need a flash though as the ambient light was just right. 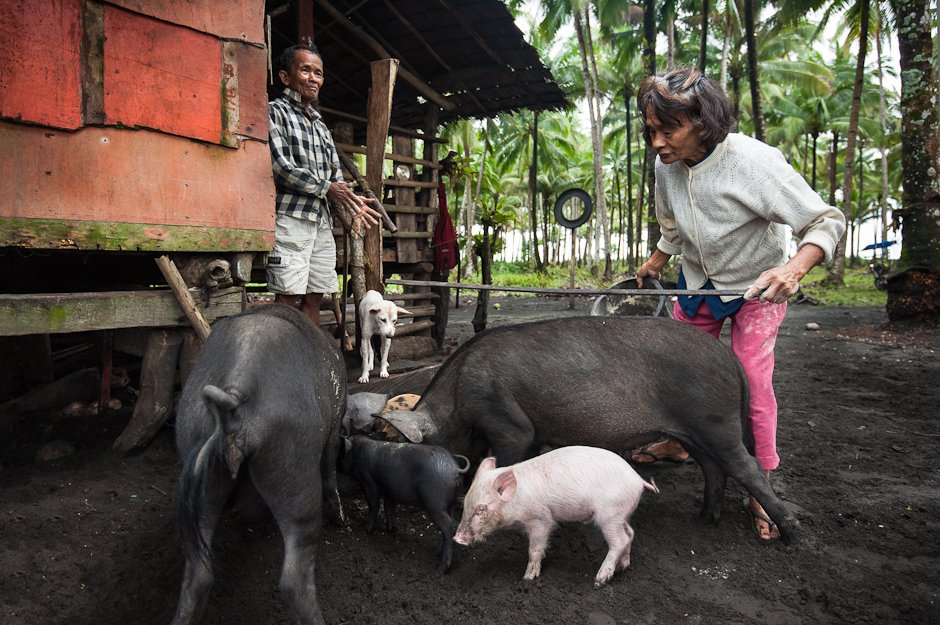 An older couple out in the morning feeding their pigs. We came across this home while waiting to get on a boat to visit some crab farmers. 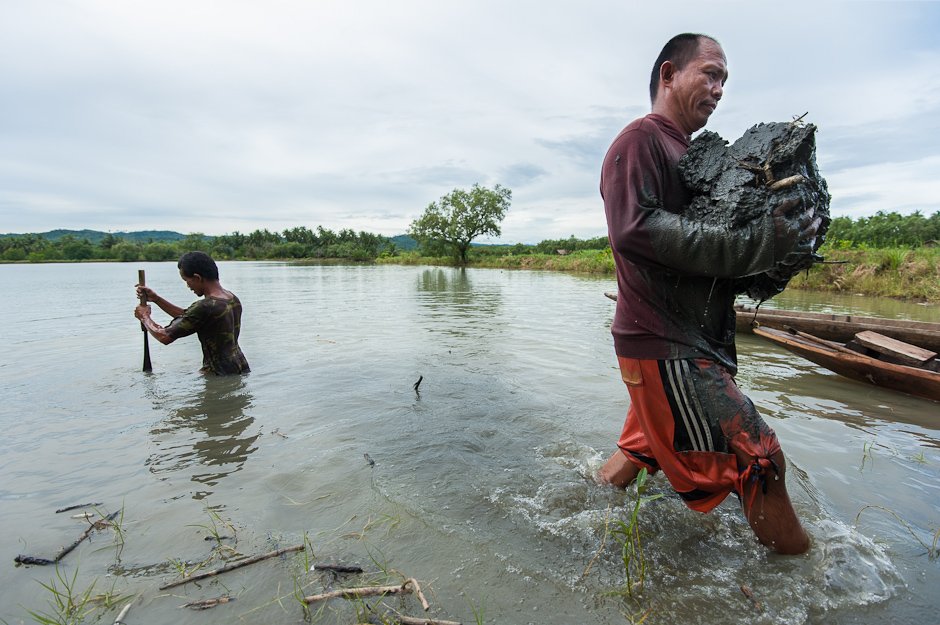 Men removing mud in a crab pond to help build up the banks around their home.

I was soon back to Cebu where some more shooting took place before finishing up another workshop. It has been a lot of fun getting to travel and spend time with students who are very much interested in learning and wanting a different perspective. I have been slowly making improvements with my one-on-one workshop tour and would certainly be open to new ideas or suggestions that people might be interested in. I am also giving some thought in putting together a local seminar or workshop either in Cebu or Manila this year. For anyone reading this that may be able to help organize something like this please feel free to get in touch with me. 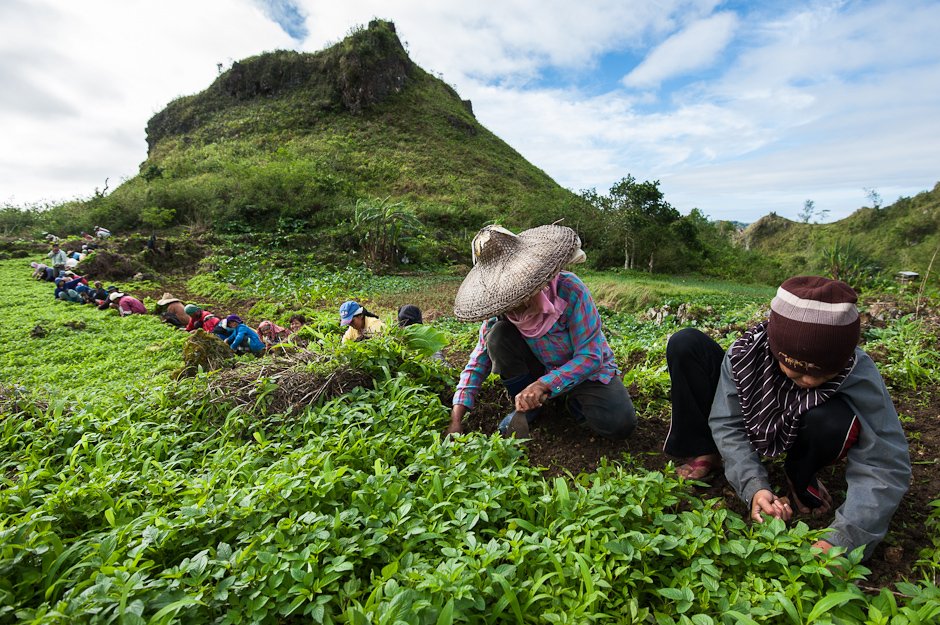 Farmers weeding a field in barangay Mantalongon, the vegetable basket area of Cebu.

2012 was indeed a very productive year and I’m looking forward to what’s on the horizon. Being able to continue my work with lots of energy and ideas must mean I am in the right place. There is a lot to be thankful for, but even more to be excited about for what this year and the next may bring. 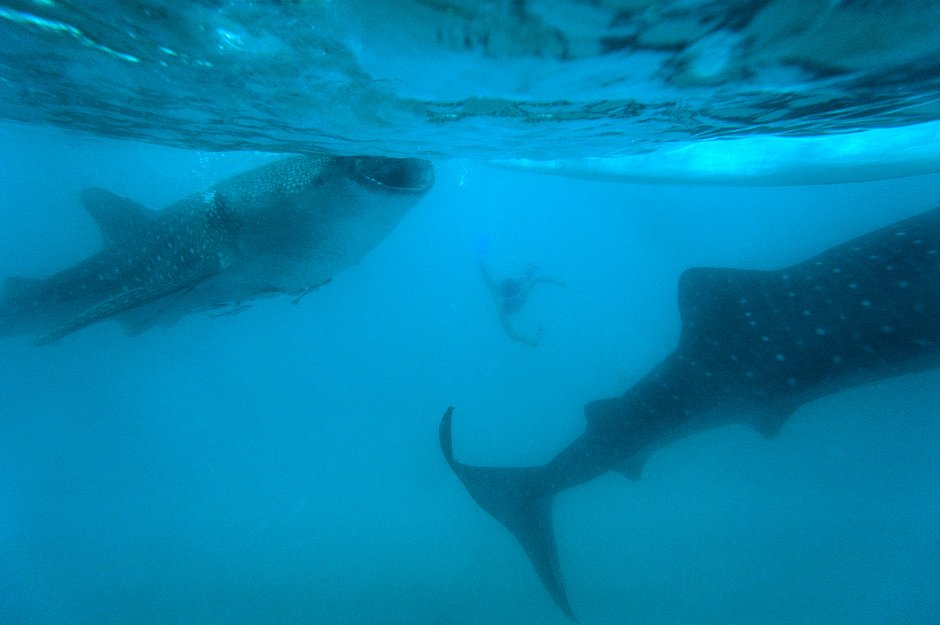 A swimmer dives between two whale sharks in Oslob, Cebu. Our last stop was a day of swimming with the whale shark of Oslob. There is some controversy about the whale sharks here because local fishermen have been hand feeding them small shrimps for almost two years now. Opinions about the controversial feeding vary greatly and while some want to ban the feeding, others believe this is an alternative income for the fishermen.