Last week I had the opportunity to take some images for the Gift of Grace Foundation, a non-profit organization which provides resources to elementary school children living within the Umapad dumpsite of Mandaue City, Cebu. There are four large dump sites around metro Cebu with more than 5000 people living and scavenging for materials just trying to survive in whatever way they can. Many of the children living within these dumpsites are born into a life of extreme poverty and are often given very little opportunity to escape the cycle. Meagan Kelly, founder of the Gift of Grace, started the foundation in hopes to educate children starting at a young age so that they can follow their dreams and eventually provide for their families away from the dumpsites. 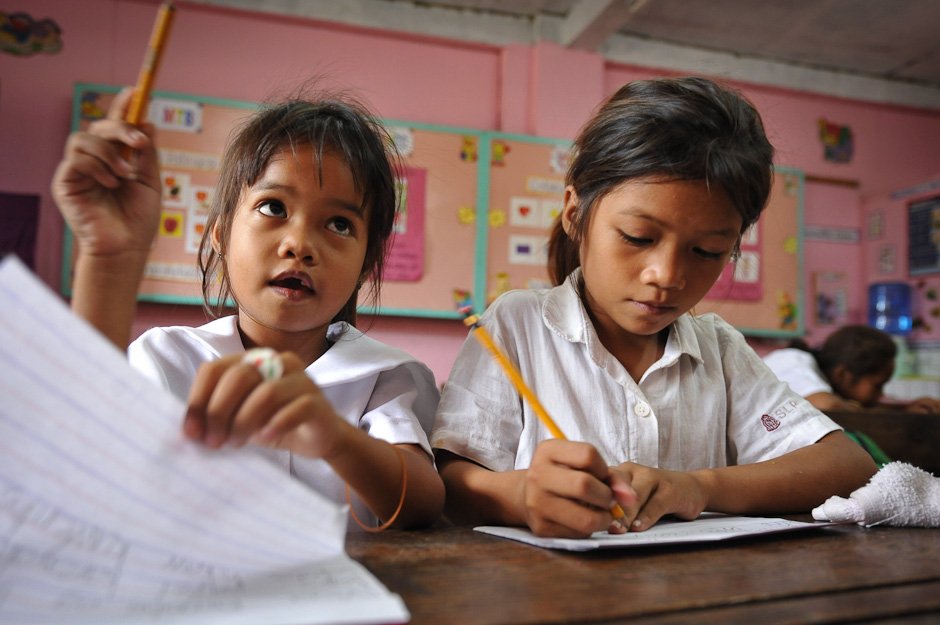 Two of the 100 currently sponsored children by the Gift of Grace Foundation in their classroom at the Umapad public elementary school. School supplies, project costs and other materials are provided to children who have no other means to continue their education with the hopes of eventually restoring their dignity and escaping poverty. 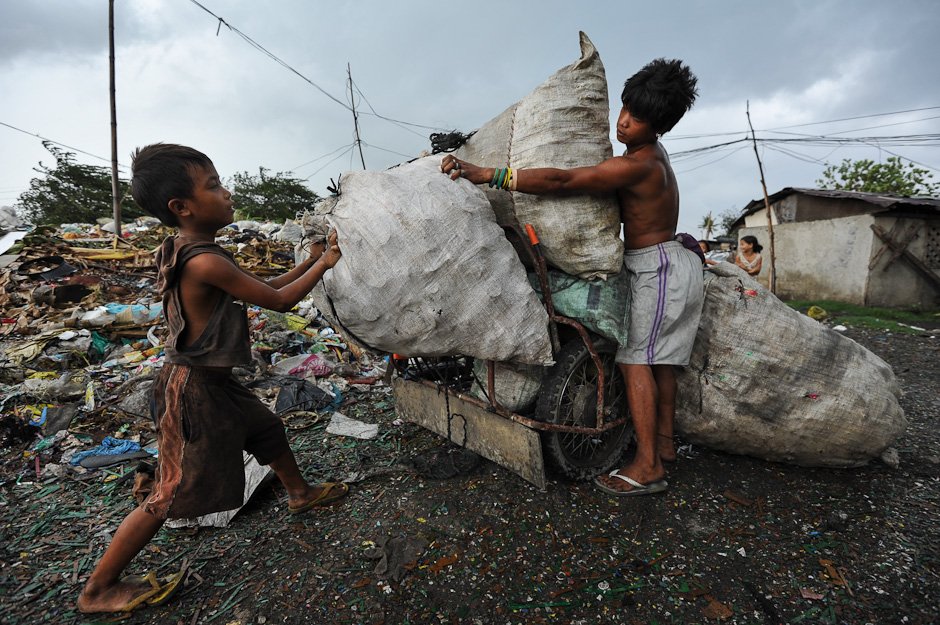 During weekends or if not attending school, children spend most of their time in the dumpsite collecting materials that can be sold as recyclables or scrap material. These plastic and metal scraps are eventually sold to a middleman where they are able to make a very small amount of money.

The Umapad dumpsite is in the middle of Mandaue City which is one of the bigger cities of metro Cebu. Honestly, I never knew this dumpsite existed until I went there last week. I had been to another dumpsite before in Cebu a few years back, but I never realized that people live within these dumps in an actual community. There are homes, small sari-sari stores, a child day care center and even a small chapel. However, I was told that the land where the Umapad dumpsite is located is privately owned and therefore makes all of the residents there illegal squatters and the chapel and child day care center only temporary structures. Nonetheless, the dumpsite is home for many people who know no other way of life. The living conditions are unimaginable and the smell of garbage is sometimes overwhelming. It’s amazing to me that people live in these conditions and are able to survive. 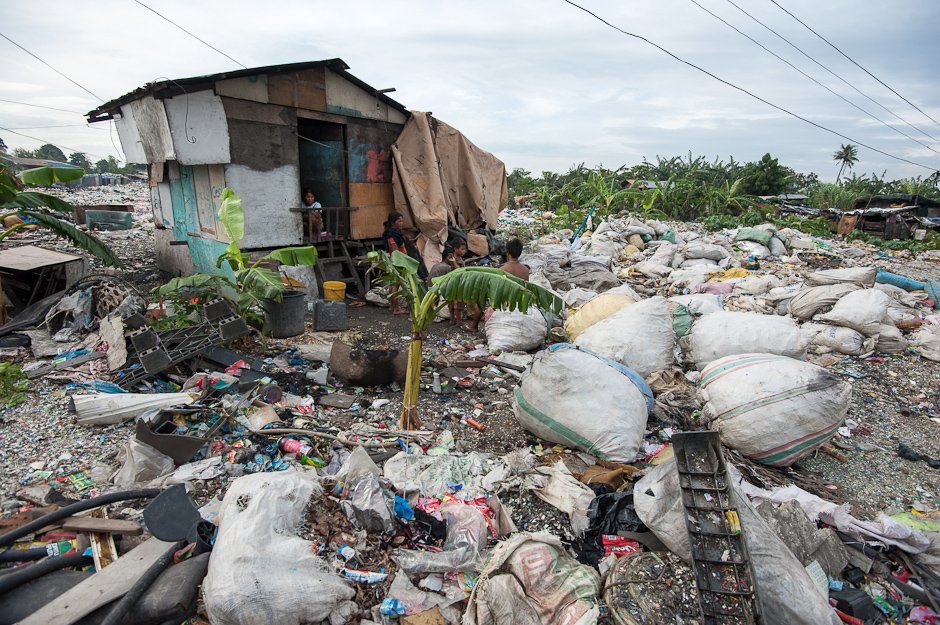 A typical home within the Umapad dumpsite. This particular area where many of the homes are found within Umapad is no longer an active dumpsite (the active site is currently found nearby). It can be deceiving at times when you see soil and plants growing from the ground. If you walk on the soil you will feel the ground below you push downwards. This is because there is roughly 10 feet of garbage under it.

I’m not one who usually likes to take pictures of poverty in it’s raw form. I think it’s always better to show people a little more dignified and therefore tend to not take those types of images. However in this context I believe it’s important for people to see the conditions that children are living in. The dumpsite provides families living there with everything they need including toys for their children, clothes, well water to take a bath, wood for their homes, food to eat, and sometimes medicine. 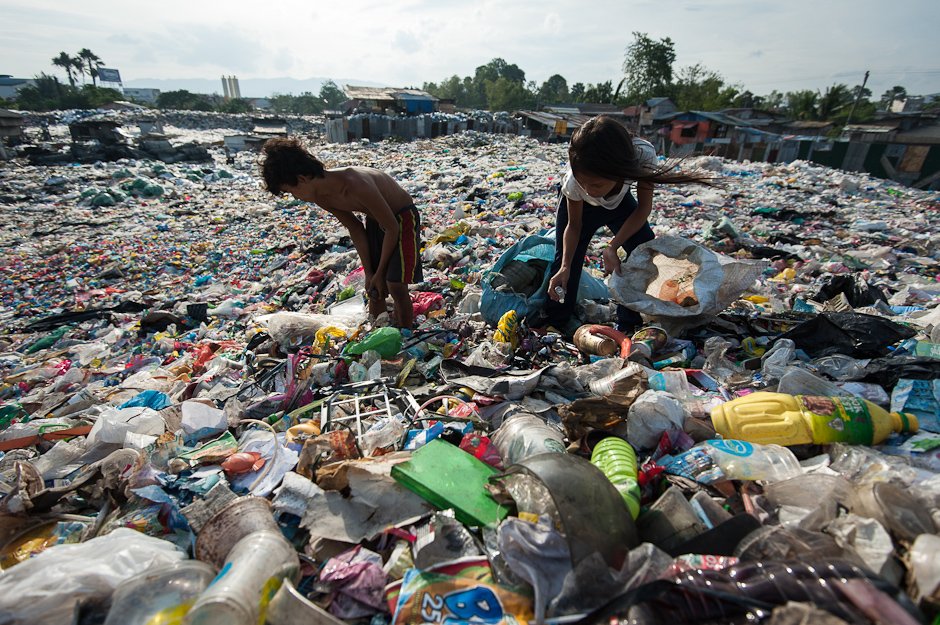 Children of all ages scavenge for any materials that can make a small amount of money. As you can see dumpsites here in Cebu are not covered with soil or managed like other dumpsites found in the developed world. Trash is simply dumped and piled up. I was also told that 10-15 children die every year from the heavy equipment moving around. Children are run over by bulldozers or trucks when they do not see the large machinery. 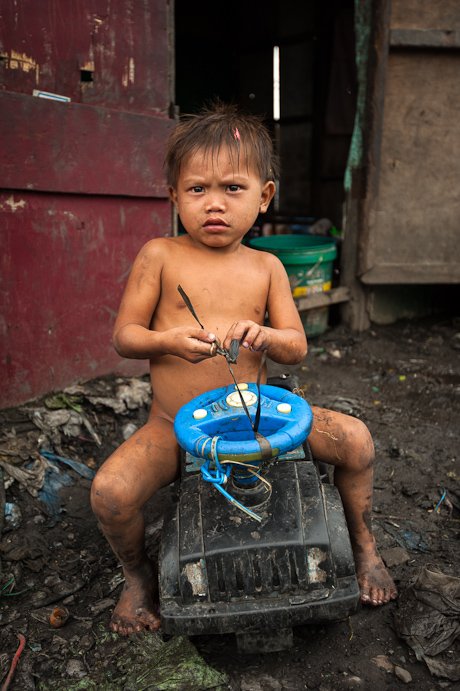 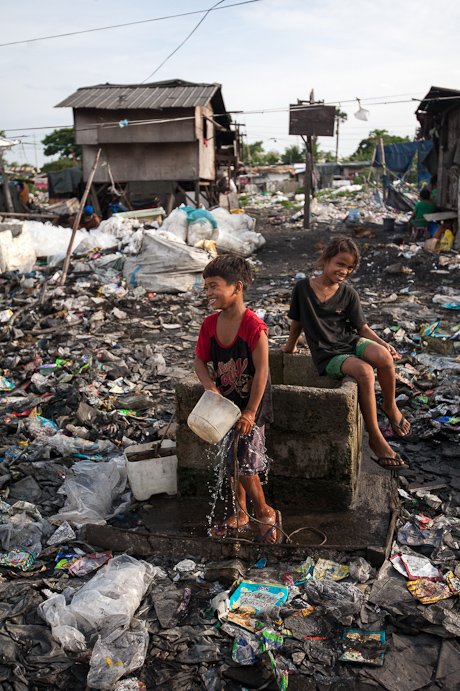 Working with the poorest of the poor certainly takes a special type of person with a heart of compassion and dedication to serving a greater cause. I met a number of people last week doing incredible work with the children of Umapad. Two of those people, Meagan Kelly, founder of the Gift of Grace and Father Heinz Kuluke are certainly impacting peoples lives first hand. 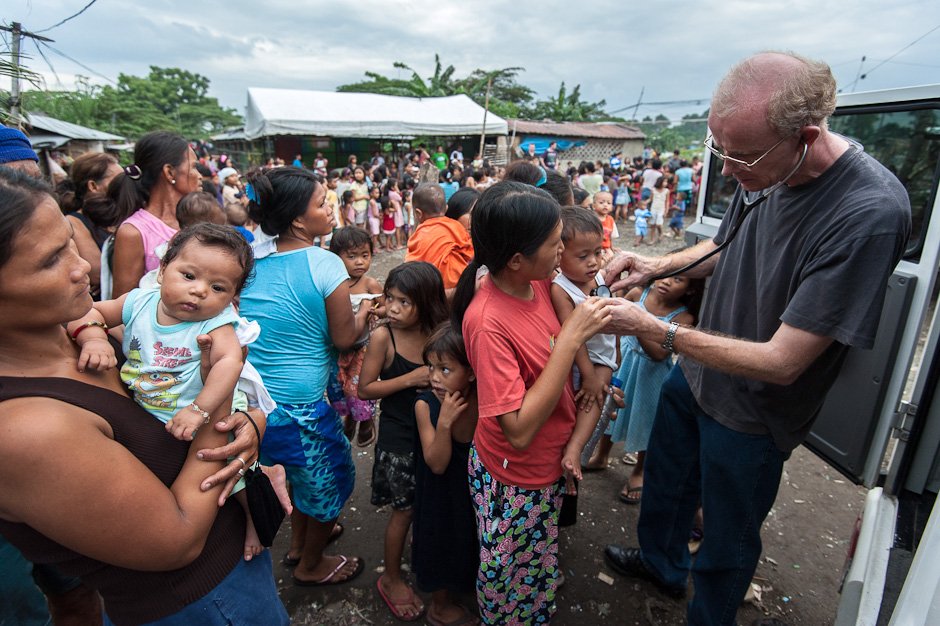 A long line forms for those sick in the community to receive medicine from Father Heinz Kuluke. Father Heinz visits the dump site every Saturday to hold Mass, hand out biscuits & medicine and visits with the community. I only met Father Heinz for a brief moment, but his advocacy and life's work is inspiring. Father Heinz does a lot of work with street children, sex workers and those living in dump sites in Cebu. He has also recently been elected as the 11th Superior General of the Society of the Divine Word in Rome. 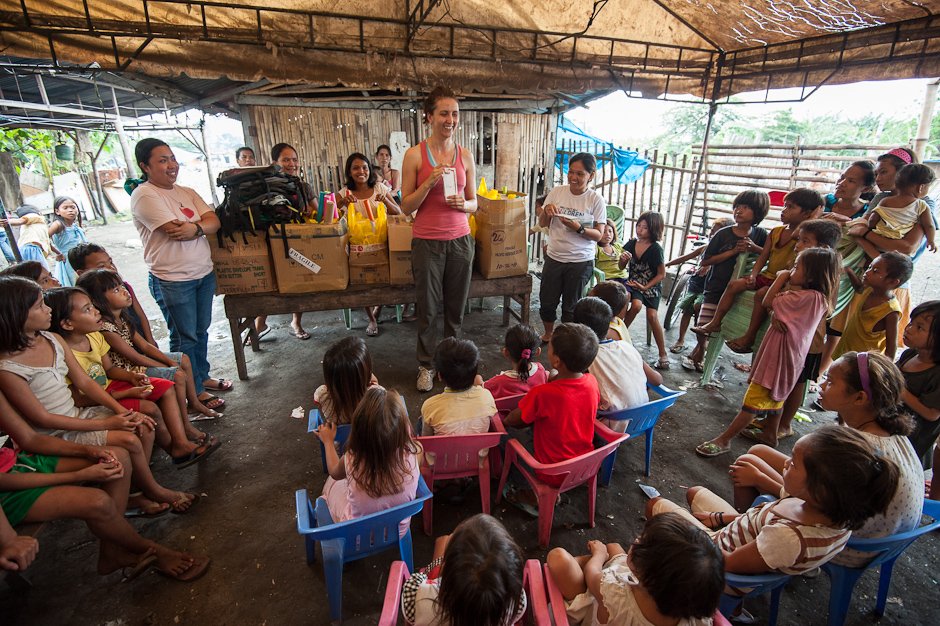 Founder of the Gift of Grace Foundation, Meagan Kelly, talks to the Umapad children before handing out school supplies including backpacks, notebooks, pencils and workbooks. The gift of Grace Foundation holds a partnership with JPIC-IDC a non-profit which has helped improve the lives of the poor and marginalized in the Philippines for decades. 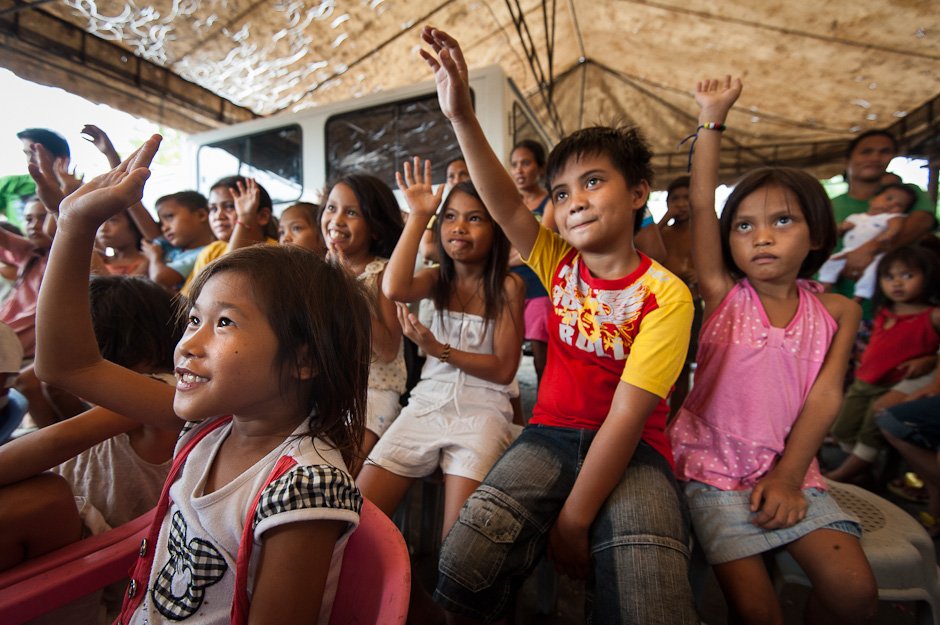 Children respond when asked if they want to go to school. The foundations vision for the future includes scholarships, on-site educational workshops, skills training, health education, and community education programs. 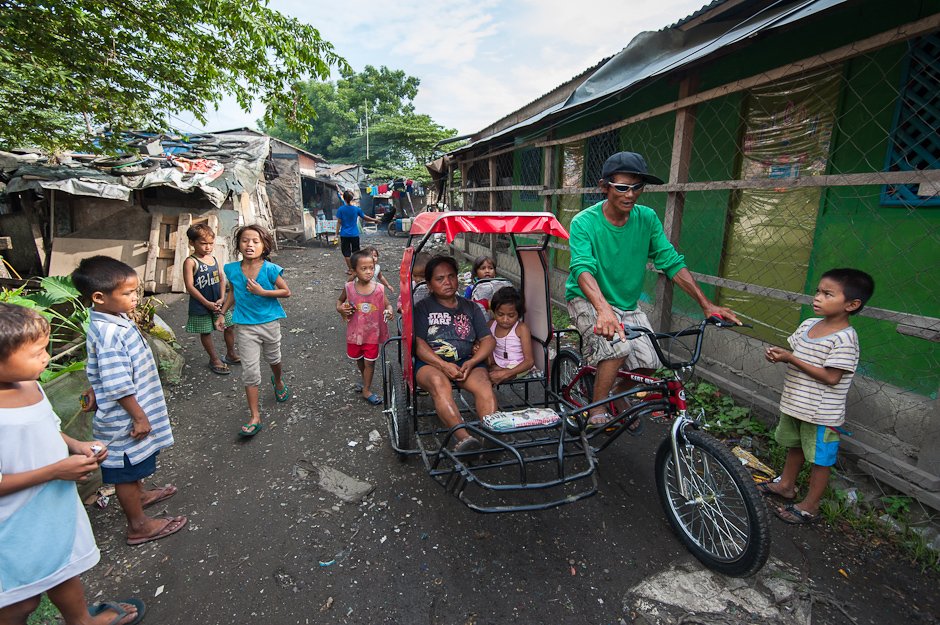 A young girl with polio from the dumpsite is unable to walk and has been carried to school every day by her father on his shoulders. It's difficult for her father as the school is far and it takes away from his time working in the dumpsite. The foundation bought them a new pedicab last week which will be used to take the girl to school now instead of on her fathers shoulders. Here the father is showing off the new pedicab in the neighborhood with his wife and disabled daughter riding.

Going to the dumpsite and visiting the children in their school was an experience that I will not forget. By the end of our short time there the children were calling me Kuya Jake (Big Brother Jake) and I felt a strong sense of community despite the conditions they are living in. The dumpsite is only 20 minutes from my home and I am going to try and revisit some of the children again in the near future. My best goes out to those helping people living in extreme poverty and to the people working directly with scavenger children in Cebu. It is a noble mission and is always in need of more people extending their help. 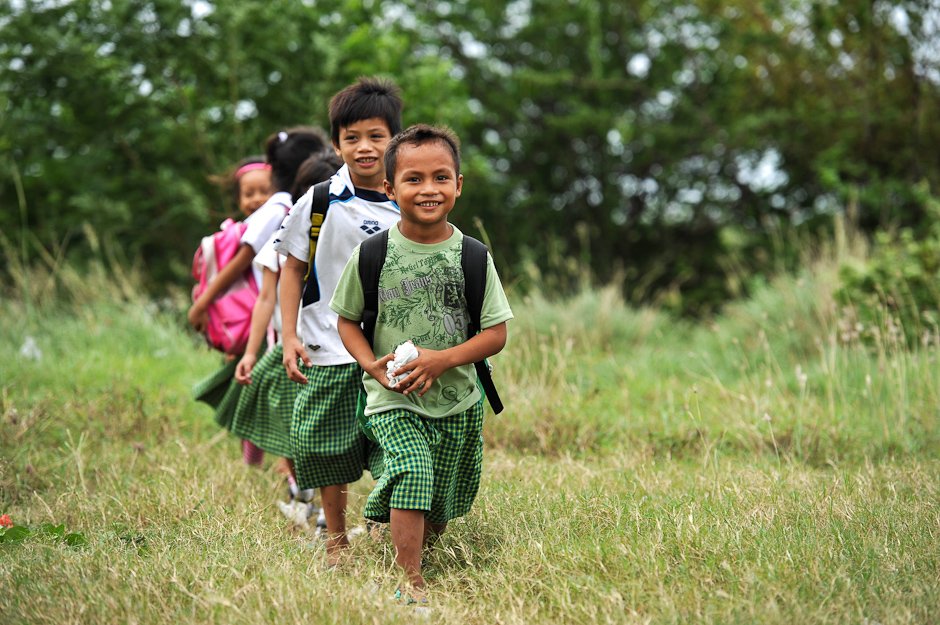 Children from Umapad walking to school with their backpacks and uniforms provided by the Gift of Grace Foundation. 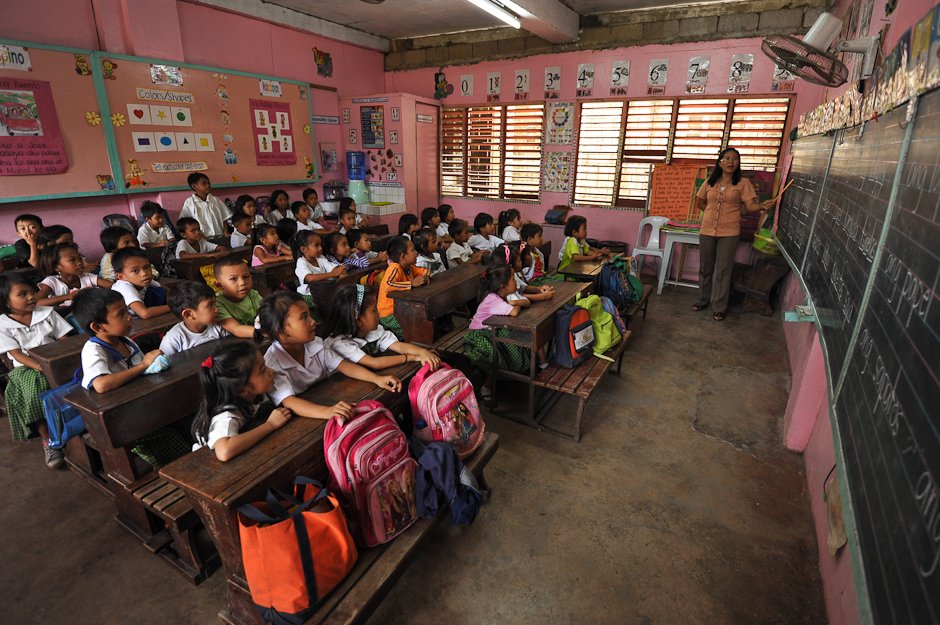 Children in class at the Umapad public elementary school. We spent an afternoon at the school and the principal and other teachers all seemed very open and receptive of the initiatives that were taking place. The majority of the children at this public school reside within or near the Umapad dumpsite. 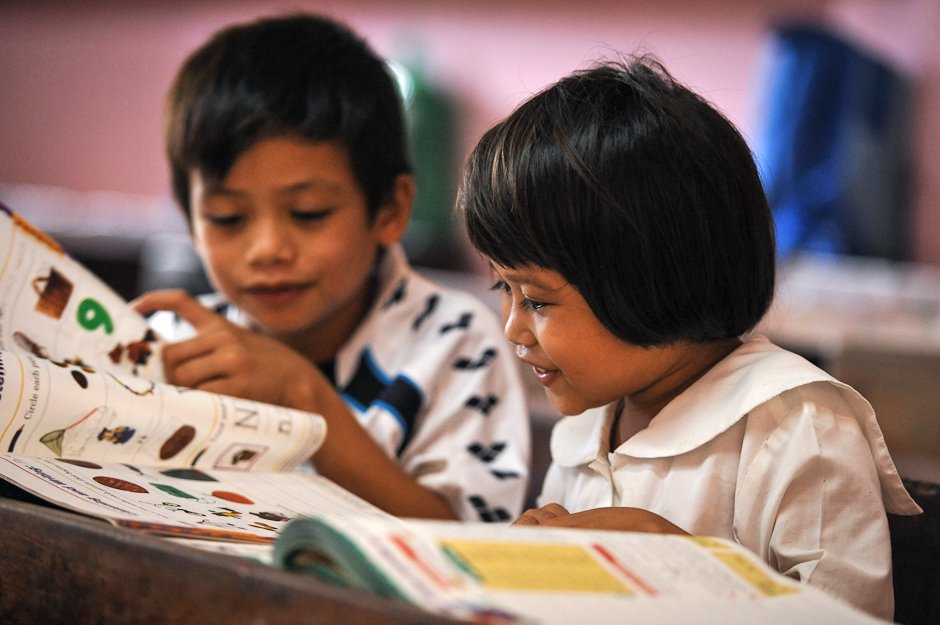 Two Gift of Grace children reading a book in their classroom. Currently, all the of scholars are elementary school students, but the foundation plans to eventually help high school and university students as well. It was inspiring to watch these two look through these books. We gave them the books so I could take some photos of them reading. What I didn't realize was they probably were never given books like this before to open freely and look through. The amazement on their faces for the 20 minutes they looked through them was uplifting. 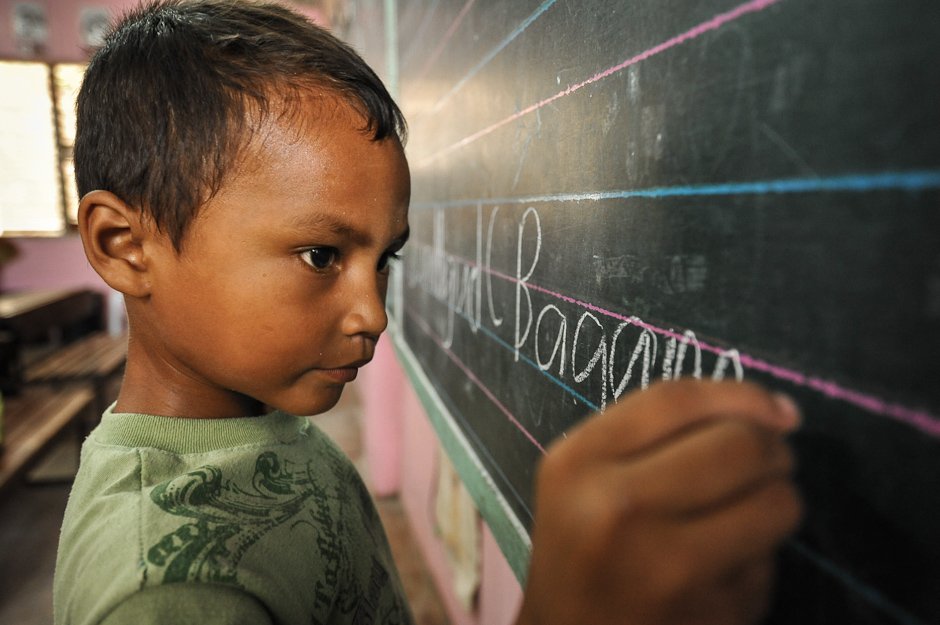