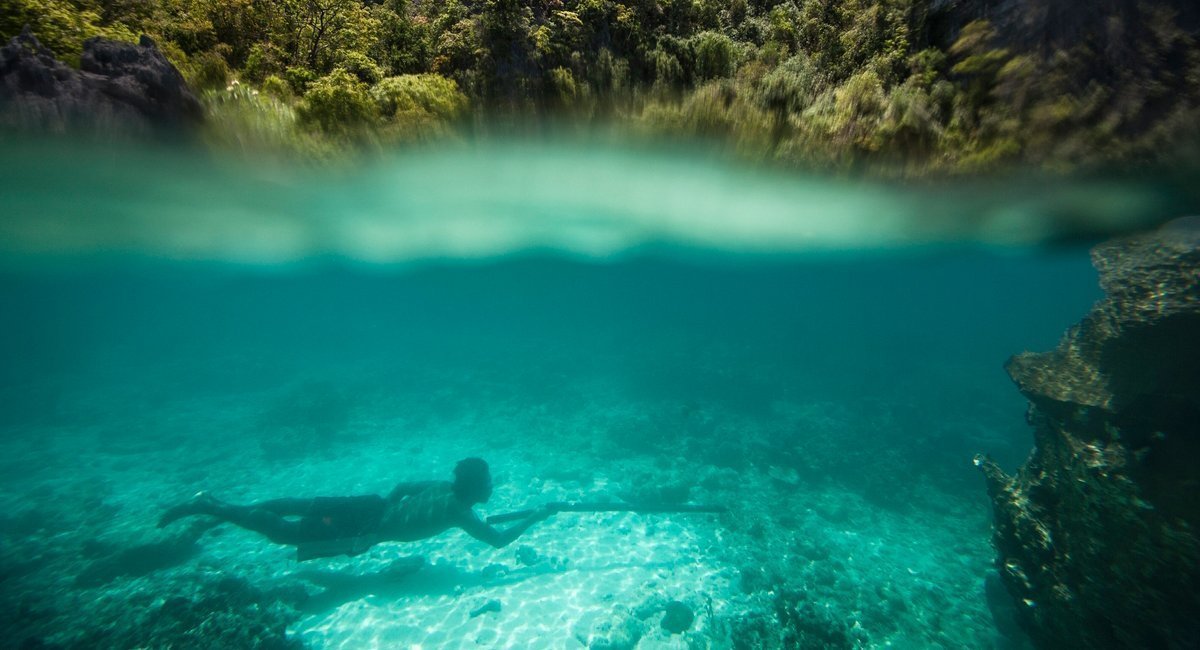 CORON AND THE CALAMIAN TAGBANUA

It’s been eight years since I was last in northern Palawan during my Peace Corps days. Back then I spent a lot of time in Coron and Busuanga doing marine surveys and remember how beautiful the islands were in this part of the country. This time my travels brought me to Coron to photograph the Calamian Tagbanua people, one of a number of different indigenous groups found in Palawan. During the months I spent in Coron years ago I remember isolated fishing communities that harvested seaweed and octopus. I also remember the picturesque tropical islands, especially Coron Island which stands tall above most of the others with its karst limestone cliffs. It was these memories in part that made me want to return and explore the area with my camera. Much has changed since the last time I was here, but even with tourism booming in the area, we were able to find some traditional Tagbanua communities that we were searching for.

The Tagbanua people are descendents of some of the oldest people in the Philippines likely coming from Borneo and historically had strong relations with Brunei. Today there are various subgroups of the Tagbanua throughout the province of Palawan. In Coron, the Tagbanua are distinct from the Tagbanua on mainland Palawan, not only in their language spoken but also their general way of life. The Calamian Tagbanua (those living on Coron Island and on mainland Coron/Busuanga and surrounding islands) have adopted a sea oriented way of life, living off of the ocean and its resources. The majority of Tagbanua in Coron live in two communities on Coron Island (a different island than mainland Coron). In recent years Coron Island has had an influx of visitors, both foreign and local, because of it’s stunning beauty. Many tourists will spend a day visiting a few different lakes on the island which are open to the pubic, including Kayangan and Twin Lagoons. However, the majority of Coron Island is still off limits to guests who do not have permits to be there. In 2003, Coron Island and its surrounding waters was declared ancestral domain for the Tagbanua and they now restrict where people can visit on the island. We are told that many of the most beautiful lakes on Coron Island are sacred burial grounds for the Tagbanua and only those Tagbanua who own land on the island can visit them. Although getting to the sacred lakes would not be possible, Coron Island would still serve as our starting point to explore the Calamian Tagbanua.

After a short visit to the crowded Kayangan Lake I noticed two small native houses very near where all the tourist boats were passing. I saw someone in the water and was curious what he was doing, knowing very well it was probably a Tagbanua man doing some type of fishing. I asked our boat driver if it would be alright to get in the water and see what was going on. I ended up spending a few hours with Landrey watching him spearfish and was later invited into his home. I was surprised that there were two Tagbanua homes this close the most crowded and visited lake on the island.

Thanks to a lot of help from friends living in Coron town and a highly motivated boat guide, we ended up spending two days in a small community on a more remote part of Coron Island. There were about seven families in this community and they welcomed us to stay with them and photograph how they lived. This was just the type of place I was looking for and it felt like all the planning and hard work in finding a place like this was finally paying off. I had a bit of anxiety before this trip, not knowing if we would really be able to find a place I had visioned. After reaching this community my anxiety went down some and I was able to enjoy the people and beautiful location where they lived.

The people we stayed with had a very relaxed and low key temperament. This could partially be because of the island mentality and perhaps partially because these Tagbanua are no longer fighting for land rights. The Tagbanua communities on Coron Island collect a fee from every visitor that comes to a particular area. Generally it’s 100 Pesos per person per stop (around $2.50). Kayangan Lake is 200 Pesos per person and this money goes to the two Tagbanua barangays on the Island. That can add up relatively fast seeing the number of tourists in the area and it’s tax free. If a tourist boat stops on a small beach for lunch, each person must pay the fee to the particular Tagbanua family who owns that land. Although the community we stayed with did not request any payment, they may be receiving some type of supplement from the general fund. Water and food is the biggest concern for people here. There is no water source in this particular community (and all of Coron Island from what we were told) and land is scarce for growing crops because of the type of island it is. Water must be brought in from the mainland and the staple crop eaten here is a wild tuber called Kurot.

There is no question that Coron Island is a beautiful place. I was amazed though that there are still somewhat isolated Tagbanua communities like the one we stayed with on the island. It makes me feel fortunate that we were able to visit this place, perhaps before tourism infiltrates more of the island. The tall cliffs and beautiful water of Coron make it an incredible place to visit. 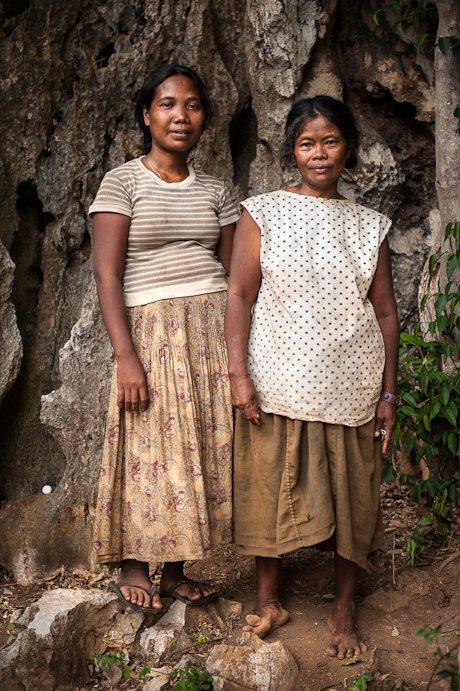 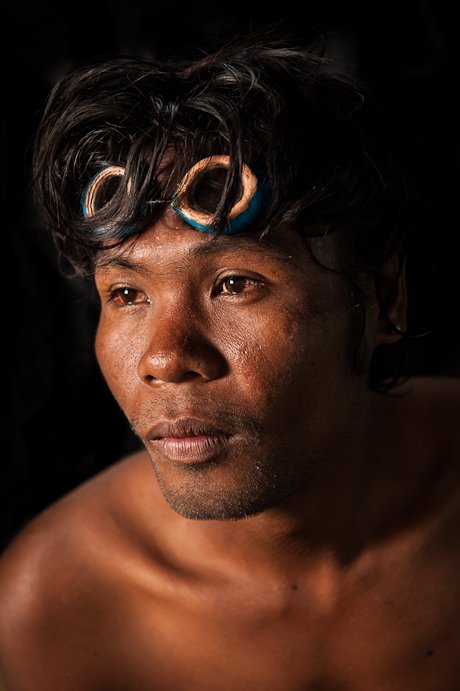 Two women on Coron Island showing the typical dress of the Tagbanua people. Before we were told that the Tagbanua likely wore some type of native g-string covering, but western clothes are now worn by all. This is also a portrait of Landrey, the spearfisherman we met earlier in the week.

The Calamian Tagbanua utilize many of the oceans resources. It seemed like we were always running into another type of activity or harvesting method in each new place we visited. Harvesting seaweed, sea cucumbers, high-priced live fish, spearfishing, net fishing and octopus fishing are some of the ones we encountered.

One of the original reasons I wanted to visit the Tagbanua was to document them gathering swift nests. This is a practice they have been doing for many years now as Coron Island produces some of the best swift birds nest in the world. This is another item the Chinese love for their “bird nest soup” and the Tagbanua have been selling their bird nests to traders for many generations now. I was hoping to find a family that I could document collecting the birds nest (the nests are made from the birds saliva), but I wasn’t fortunate enough to find one. The birds make their nest high up on the cliffs and within the caves of the island. We came during the right time of the year, as the nests are only collected from December to May. However, within this time frame the nests are only collected at certain times when the nests are at optimal readiness. This is something like every 30 days or so. Unfortunately, we were not able to find a family collecting during the time we were there. This makes an excuse to visit again sometime in the future.

We were able to make some shorter visits to a number of different Tagbanua communities on Coron Island. Each one had a unique feel to it and all were fairly isolated from each other. There were also some single isolated homes on the edge of the island, mostly single families who were watching and protecting there swift nest land. After swift nest season is over these families will go back to their main community, likely in one of the two main barangays on the island. Boat travel around the island is really the only way to get around. Because of the tall cliffs there are very scarce paths or routes connecting different communities. Bamboo rafts are often used to get around for sort distances.

Our time with the Tagbanua on Coron Island was relatively short. Being one of the few success stories for indigenous peoples in the Philippines, we were not really sure what to expect with our trip here. By success story, I mean the Tagbanua having full claim to Coron Island and the surrounding water as ancestral domain. We thought things may be harder to organize and perhaps we might not be able to find a more “authentic” community. It turned out that things went fairly well and I was happy that the places we visited were so accommodating. There is also a lot of talk about the power struggle between the Tagbanua on Coron Island and there is a really good article written in 2009 about this by Geographical. Basically, now that the Tagbanua have rights over their land there is conflict as to where the tourist money is going. Clearly, by having full rights to their land the Tagbanua of Coron Island have set an example for indigenous rights in the country. I just hope they will stay on course and figure out the best way to continue and improve their lives.

After our time exploring some of Coron Island, we decided to visit a few Tagbanua communities on mainland Coron. We wanted to see the differences between the two places and I was interested in finding some octopus fisherman. We traveled by jeepney for three hours to a place on the northern coast of mainland Coron known to be predominantly Tagbanua. This was probably the worst jeepney ride I have taken in recent memory, but likely because we had just taken our malaria prophylactic and we were fairly nauseous the whole time. Glad that is over. We ended up exploring the coast for a few days as there were no rides back to Coron town.

I’m back home in Cebu now for a couple of weeks recollecting my thoughts before heading off to Vietnam. I’ll be working on another post as well about our visit to the Tau’t Bato of southern Palawan in the coming days. It’s time for a little down time with the kids before heading off again. 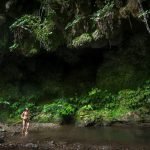